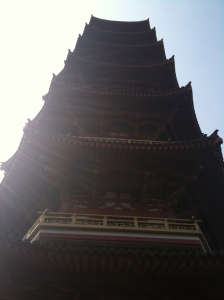 Industry moves Wenzhou, to be sure, but ask me what higher form  of spirit moves the city, and I couldn’t tell you.

I miss the sound of the muezzin that can be heard from our home, or anybody’s home no matter their location, in the city of Addis, in the early hours of the morning and at all other prayer times. It is clearest in the morning because everything else is still quiet.

I miss the sounds of early morning mass, sometimes unnaturally early, depending on what saints’ day or fasting day is being celebrated.

That ever-present confirmation of a shared spirituality to a place, a communal belief in something greater than all of us, and our individual religions, that holds us accountable to how we treat each other and how we conduct ourselves. A constant thread of belief, of faith, of acknowledgement of God, which permeates every aspects of life.

I miss hearing the name of God, the thanks to God, in each greeting, in everyday conversation, not as some kind of expression of religiosity or fanaticism, but as something basic, assumed, even taken for granted. So much so that you usually fail to notice it.

The shared culture, simply, of Belief, where there is an acknowledgement of the Greater in every interaction, no matter how mundane and routine.

Perhaps it is here and I am blind to it because of my outsider status, but there does not appear to be any such glue, any such invisible thread that connects the people to each other and to that which is Higher than all. There is a sterility, a soullessness to the day-to-day happenings, even with the smiles and goodwill that can be extended unexpectedly, as I see them from my unprivileged position. I don’t think I’m wrong.

You need not speak the language nor know the culture of a place to step into it and be able to feel whether you are in a place that gives due to the unseen, that not only practices but lives its faith in a matter-of-fact way. It’s something you can witness even you have haven’t the language or the culture-specific discerning for it. If the people acknowledge it and pay its’ due, it will be there to be felt in the air. It’s not here.

There are temples that are spoken of, temples to what or whom I don’t know. I assume Buddhist. They seem lonely, more like tourist attractions (when there are any), or landmarks to point out parks and recreational islands. It’s hard to believe that a whole city of people can function without a spiritual dimension to their lives. Maybe they are forced to keep it private? It has been said that there is no civil society in China. No groups or organizations created by and for individuals according to their interests. Maybe that is why?

There is one church in the area with a tall, red, almost defiant, crucifix on its’ rooftop. It’s locked in the daytime on a weekday. Also seen one similar red crucifix on the closed door of a hardware shop, as a curious identifier of “Christians here”.

Of superstition, there is plenty. What is present on almost every door, hanging wreath-like, are the red and gold “good luck” signs hung on the New Year. On many a balcony, the red and gold “good luck” lanterns with tassels hanging out of their bottoms. The way parents drive their children to succeed, though, hardly seems like the actions of a people who attribute their good fortune or lack thereof to Lady Luck.

I still have hope, that the secrets of Wenzhou spirituality will unfold themselves to me as I become worth of them.

Meanwhile, I look for signs of God anywhere and everywhere.

An old lady tapped me on the leg as I stood in the bus, and pointed out an empty seat to me. I declined with a polite smile, and remained touched by the gesture until days later, when the shadow of paranoia loomed over the happy event, and whispered suggestions that maybe she just had a sore neck from having to strain up to stare at me, and just wanted me to relocate to a better vantage point.

Another time, I mistook free green tea for holy water.

Free green tea stands abound in the city, subsidized by donors whose names are added to an already-dense list written in white paint on wooden boards covered in red cloth. Habesha-me, I initially thought the passersby who stopped and helped themselves to one steel cupful of the murky green liquid, or filled their personal bottles before continuing on their way, were partaking of some kind of holy water. Turns out, it’s just free green tea of lukewarm temperature. It’s supposed to cool you down in the summer heat. Nothing mystical about it, simply practical. Anybody is free to enjoy the benefits. You don’t have to be of a particular persuasion.

You do, however, have to be a particularly Orthodox persuasion to enjoy the handfuls of dousings of what is definitely holy water if you happen to be invited to a lunch or dinner party at a private home in Addis, to which the hostess’s father confessor has also been invited. You try to suppress your giggles and assume a temporarily somber and spiritual air as the water soaks through your carefully arranged hair and drips down your forehead and nose. You cannot wipe it off, because that would be sacrilege. So you must sit and carry on the rest of your civilized afternoon or evening and pretend that the water voluminously trickling down your face is perfectly normal, and holy. You live your faith in the middle of all your modernity and nobody thinks twice about it.