Depending the position of the sun when you ask me, I might be pro or anti-mommmyhood. Morning being generally an optimistic time, ante-meridiam will find me pro. By afternoon, reality has beat the sunshine out of me and it is I who is in need of superhuman patience and pampering.

Auntiehood, as you may know, is less choice-friendly. You have about as much say in becoming one as about that second helping 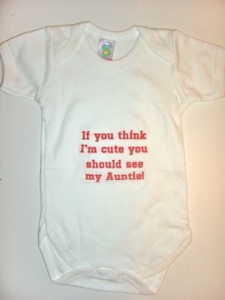 during a meal as a guest at a habesha home. It’s gonna land on your plate. And don’t lie, you’re happy to eat it, even when it wreaks havoc on the nice plate-clearing design you were working on.

So of course I welcome the Adorable Little Persons. They’re just so damn cute, tumbling into my life like gate-crashers at a party of one. To protect their mostly-formed identities, let’s call them 2010, 2011, 2012, 2013 and 2014, with more in the forecast. (No family-planning vote for you, Auntie!)

I’m not unaware that my relationships with 2010-2014 will become as unique/complicated/nonexistent as mine are/were with my own aunties, even more so since I am one “hiccup” removed from direct auntie status. As an out-of-town cousin to the mommies, I occupy a fuzzy position somewhere on the spectrum between Honorary and Certified Auntie. Call me fun/drunk/absent/moody  – but never deadbeat! – Auntie, though I do forget to tell them ‘bye’ when I skip town. Hey, they won’t remember these little deviations from protocol, right?

I know I’m going to have to step up my auntie-game soon. 2010 can already hold a conversation and remember shit and give logic a run for its money, for chrissake. They’ll all grow. Into actual persons. I’ve seen it happen with a late-born cousin. One minute you’re powdering their little behinds and the next you’re sharing lipstick.

The best I’ve been able to figure out my job description so far is as a sort of optional, part-time parent-figure that should be kept behind a glass case labeled ‘break in case of emergency’. Disciplinarian? Who, me? Heck I still get blue for the days gone by of ‘just us crazy kids’. But I’ll play along with the grand conspiracy of right actions = right outcome. Ever since 2010 came along, my first instinct on seeing those first pictures has been to PROTECT! I want to put them in a big bubble from which nothing good will ever escape and into which nothing bad will ever enter.

For a long time, I had viewed aunties as one of those people who pre-existed, born that way. It was not until third year university that I actually witnessed the creation of an auntie when my roommate’s oldest sister had the first baby of the family. I had no clue what to get the new auntie by way of a ‘congratulations’ present, so I bought a Today’s Parent magazine. Then I drew nice big letters ‘A’ and ‘u’, cut them out, and pasted them over the ‘Pa’ and ‘re’ of the magazine cover. Tada! The first (and only) issue of a historic publication known as Today’s Aunt.  And that’s pretty much how I’m going about it: cut n’ paste. Sorry kids.

Maybe some savvy veteran or mid-career aunties out there got tips?