I once heard someone say, “Cemeteries are the richest places on earth because most people take their great ideas to the grave.” It’s a bit of a forced

analogy, to be sure, but it stuck with me. So much so that I tweeted it; now that’s saying something. Anyhoo, as I inch closer to my own permanent spot of land one year at a time, the quote brings to mind some great ideas that I’ve had over the years. I share them here as a way of enriching, if you will, this blog if nothing/nowhere/noone else.

As a kid, I started out real grand. What kid doesn’t? I wanted to find out WHO GOD IS. And this was totally separate from any religious conception of God. I was old enough to be aware of the concept of “God” but not yet caught up in the religious intricacies of Him. If there was a trigger event that made me want to do this, I have no conscious access to the memory. What I do distinctly remember is going through that phase of deciding to be the first to discover WHO GOD IS (I put that in all caps because that’s how solidly the idea had situated itself in my head) through simply thinking about it really really really really really hard. (Feel free to add more ‘really’s).

It must have been when that didn’t pan (wink) out that I moved on to my next “big idea”. It was around the same time that I decided to create a potion that would cure all diseases. The way I was going to accomplish that was by taking a sample of the seeds or petals of every single flower in my mother’s garden (sorry Z) and mashing them all in a bowl, then leaving the goo aside for a few days – in some corner of the yard visited only by cats with too-discerning palates – then mashing it some more, then leaving it aside, then returning to mash it again, and repeating such process until out emerged a potion that would cure all sickness known and unknown, for all time.

…From what I hear, they’re still working on curing cancer.

From then on, it’s pretty much downhill. It takes a while to recover from two spectacular failures, so it wasn’t until I was in my early twenties that I hit on the next one (either that or I’ve blocked out swaths of my childhood and teenhood). It was to be Teret Teret Productions (teret = story, in Amharic). It was to be a theatre company that put on shows of Ethiopian folk tales for first generation kids and their families. I conceptualized the whole thing – mission statement, sponsorship documents, annual budget, season, set and costume sketches, etc.) for an undergrad class project on independent theatre. It was the one course that I thoroughly enjoyed – even though the prof intimidated me to no end – and got my best mark in, not to mention an actual letter agreeing to discuss sponsorship from Ethiopian Airlines. 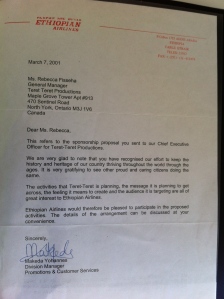 After a few more idea-free years, came two in succession. They were a set, in a way, because both would involve cross-country journeys, one across Canada and the other across Ethiopia. With the former, I would stick to small-town Canada (think Vinyl Cafe), the kinds of places where I’d turn heads for all the wrong reasons (and I know I don’t have to go far for that, as a once trip to Milton showed me). I would document my experiences of navigating these Canadian spaces as, technically, a Canadian. With the latter, I would backpack across Ethiopia total white tourist style, and create a sort of guidebook from the perspective of a .5er, geared for second and subsequent generation ET kids for whom the country would be just as foreign as to a tourist from elsewhere.

Next up – and this one I dabble in from time to time, as in write a few paragraphs and promptly delete them: a habesha romance book series, sort of Harlequin meets Fikir Iske Mekabir (the romance epic of Ethiopia), but without the death and feudalism, and serialized instead of in one small brick of a volume. I would use the very colourful dating histories of my girlfriends and cousins as inspiration, which they are all ready and willing to dish at a moment’s notice. So many of their tales are so bizarre they might as well be fiction. Of course, what I really want to write is a habesha erotica series, and the romance series would be a lead-up to it (we’re assuming they’re mutually exclusive, of course). Possible scenario: Meron works the night shift at Starbucks. Every day, after she closes up, she takes a free coffee to Bruck, who works the overnight shift at the parking lot across the street. On the first day of winter, he invites her into his booth. Before long, the windows have fogged up. Mesfin, the community’s most successful entrepreneur, is trying to drive his Benz out of the lot but getting no service. He soon discovers a crack in the booth window and, seeing the activities within, starts recording it all on his phone. When Meron and Bruck realize this, they don’t exactly mind…etc, and so on and so forth.

Not sure if this next idea is an outgrowth of the last one (if so, it’d make one hell of a story!), but one morning I woke up and thought how cool it would be to start a call-in buna service business (buna = coffee ethiopian style). The business concept was simple: I have all the equipment and ingredients for a traditional buna setup. I advertise a service where people can call and hire me to come to their house and make buna for them, at a flat rate of $100 plus transport for a standard three hour session. A bit on the cheap side, but ok for starting out. I thought it would be a neat idea especially during the holiday season, when people are more likely to be entertaining and keen to have a unique attraction at their party, one with the added bonus of keeping their guests alert.

Lastly, but not leastly, I wanted to give a second life to the posts on this blog, which go back to 2011 now. Reading back over them, I see a clear narrative of a life that, with some editing and expanding and the addition of a preface and epilogue, would make a great e-book. Sort of ‘a few years in the life of’. Not because I’m any more interesting than the next ETDiaspora, but because I am here too and so is the written record of my being here. diaspora: the Unreliable Narrator started out as my way of keeping track of life in the most alien place I’d lived it in up to that point – China – then slowly morphed into being about life as seen through the eyes of a half-generation immigrant. I sense that, going forward, it will morph once more into being a documentation of the process of interpreting and reflecting on that life through the lens of fiction.

So, that’s the sum of my big ideas. Is it just me or is the screen glowing a rich shade of gold now? I’m willing to take suggestions as to which idea to tackle first. Otherwise, I’ll tackle them in reverse order. That way, I will accomplish the very first big idea right before I meet its subject.

Leave a Reply to andthreeCancel Reply