There are days when I step out feeling like the cover of Vogue and the first person I meet takes one look at me and says, “Oh are you tired?”
And then there are days when I step out feeling like something pulled out from under the sofa cushions and the first person I meet says, “Hey you look amazing!”
And then there are days when my new driver’s license comes in the mail. Much sooner than I expected. Featuring the new photo they ambushed me into taking when I most certainly did not expect that when I left the house that day, to get my license renewed, that I’d be taking a photo that I would literally carry around with me for the next five years. A photo that I would have to show on my ID when I’m out for a bit of nightlife, looking (I think) like the cover of Vogue.
The person I was sharing the elevator with when I opened the envelope and saw my new license photo couldn’t suppress a smile at how visibly I cringed and shoved it back into the envelope. Was this this some sort of cosmic punishment for the fact that I’ve never owned a car, and I drive maybe three times a year, and technically I should have failed my driving test the third time I took it, just like the first and second time?
On the new photo, you can tell that I am NOT pleased. Neither is my hair. If there was a thought bubble above it, it would say: why the $@!*#% are you taking a photo of me today when I look the same as I did five years ago = shitty? Now for the next five years I’m going to look shitty AND pissed. Three-two-one-DIIIE!
But, that’s not the point of this post. The point is still vanity, but of a different kind: organic vanity. By which I mean vanity about my organs.
As usual, the new license came with an Organ and Tissue Donor Registration form. I don’t now if this is universal in the West or if it is just a Canadian thing. Normally, I throw this out. (I say that as if these forms come to my mailbox every week. They come every few years, but they weird me out so I throw them away quickly.) The fact that the form comes with the driver’s license creeps me out every time. Why don’t they just attach a note that says: well since we all know that you’re an oblivious driver on your best days and a downright dangerous one on your worst, let’s go ahead and get this part over with now so that at least some good will have come of you being allowed behind the wheel of a car in the first place.
But this time, I kept the form. It’s been sitting on my dining table for two days. And not in the way random papers squat there until I get around to cleaning up. It’s been sitting there with a quiet purpose, chewing at me as much as I’m chewing at the carb-free dinner that’s meant to elongate my healthy life. Because it knows, this time, I might sign it.
The fact is, I’ve always been fascinated by human anatomy. After English, high school biology was my best subject. Occasionally, I watch surgeries on YouTube. While the idea of parenting leaves me cold, I find the prospect of growing a human person inside my body absolutely fascinating and one of the must-have experiences of a lifetime (surrogate-seekers please navigate to my ‘Contact’ page). On the few happy occasions when I’ve needed stitches (broken glass, ingrown nail) I watched the procedure like it was the series finale of Six Feet Under.
Speaking of Six Feet Under, I don’t remember the exact episode but there was one when they showed a body after it has been…harvested for organs. One word comes to mind: owie! The eyes were sown shut, for chrissake!
Which brings me to one of my main reservations about being an organ donor. I feel like it will hurt, a lot. Getting cut up like that, with no anesthesia. And I have it on an OR nurse’s authority that they do not handle your body very nicely when they are raiding it. I know..I know…I won’t be feeling it then but I’m ‘feeling’ it now just thinking about it dammit!

So I can only imagine what the body looks like after all that. I know…I know…What am I trying to be, a pretty cadaver? Well no, but at the very least I don’t want those who troop past my casket to do a double take and say, “Wow, she must have died tired.”

I must say that I have no religious reservations about organ donation whatsoever. None of that ‘the body must go back to sender the same way it was delivered’. I’ve tattooed and pierced my exterior, and done God knows what damage to my interiors, to have any illusions about my refund-value.

At first glance, I had noticed eight tick-boxes on the donation form. They were labeled: Kidneys, Heart, Eyes, Bone, Liver, Lung, Skin, Pancreas. Naturally, I thought these were for me to pick which organs I could part with once I had departed. But on closer reading (always check the fine print…okay not the fine print, just the actual 12 point font text that takes up the rest of the page), it turned out that the tick-boxes were for what I don’t want to donate. Which means that, aside from what I tick, they’ll take everything else. (EVERYTHING everything?) I had to read the instructions a few times. Sounded kind of tricky, a touch manipulative. If person doesn’t read closely they’d think it was options on what to give, not what not to give. See what I mean?
So I started to pick and choose. Kidneys? Easy. Help yourself. Take two. I’d give a kidney even now. It’s almost routine, like sharing an appetizer. I don’t share meals. Which is why my heart stays. Plus, if I’m going to be superstitious about any organ it’s my heart. I talk to her a lot, so I feel that if I go down she has to go down with me. Actually it would be the other way around. If I go down, it’s her fault, so no way does she get to knock me off then stick around for a sequel. Eyes. My eyes stay too. If anyone thinks they get to keep my eyes, they’re just dreaming. I got to charm my way past the pearly gates somehow. Bones. That’s a tricky one. Without bones, won’t I end up looking like one of those inflatable air dancers, minus the air? Bones stay. Skin. Skin? What the heck do they want with my skin? My brown skin? I don’t see that becoming a high-demand item any more than hair weaves made from African hair are, if such a thing even exists. So, skin stays. By the way, you’re welcome to my hair. I’ve been told it’s “good”.
That leaves liver, lung, and pancreas. Check, check, and check. Boring? Yes. But still generous. About a third of me free for the recycling. My stomach and intestines and baby-factory are up for grabs, but I don’t see them on the list. Their loss.
But all this was just hypothetical. Just a side show in the circus of my mind. I still haven’t signed the form. I take it up again, for another closer read, and notice something up top that makes me stop in my tracks. I don’t know how I missed it. It was white text on black background. It said: If you needed a transplant, would you have one? Well yeah! Duh! Of course. Ideally a brain transplant, if you have it. I’ve been convinced that I need one for some time now. If so, help save lives and register today.
Now if only I could decide who my liver, lung, and pancreas go to. Like allocating property in a last will and testament. But I suspect that’s a little bit illegal. Besides, I don’t think I’d have the stomach for that. 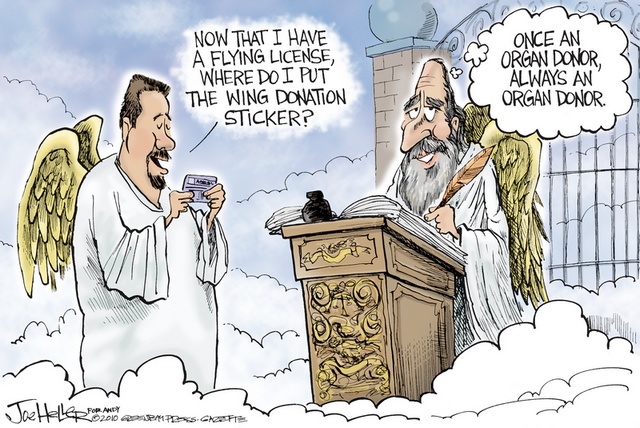