Well, the satellite dishes were everywhere in full bloom in Addis, and I’ve learned that its impossible to be matter-of-fact not only about going to 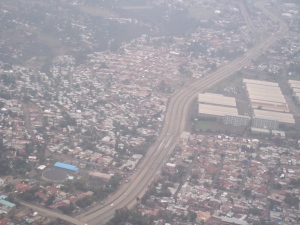 but also leaving from Ethiopia. The ‘going to’ always means something- if not to you-the-goer, then to the person who hears of it. Back in the spring and early summer, when what’s now behind me had yet to come to pass, and around that time when folks were asking each other about summer vacation plans, I’d always get one of three reactions (or something along their spectrum) when I say that I’m going to Ethiopia: envy, surprise, curiosity. I’d try to play down this presumption of the exoticness of my destination, but not even I could sell myself on the claim that it’s just another place on the map (where I happen to have more places to stay than I have days to spare and where I never have to spend a cent if I choose not to, even though I’m the “rich” one…more on that later).

Perhaps the best proof that it never was and never will be just another destination is when my visit is over and family tries to pack me with as many bits of Ethiopia as my resistance will give in to and the luggage scales will allow. I don’t know what it’s like for ETDiasporas who live in other parts of the world, but for me returning (immediately or eventually) to Canada, there’s no interest in where I’m leaving to; it the fact of my leaving and the prayers for my safe passage that are front of mind for family. I could be going to Saturn for all the difference it makes, for all the fuzzy pictures I’ve drawn for them of “what it’s like” there, the “there” that’s referred out by the all encompassing term “outside country” wuch ager. On this most recent trip, I had a trip-up moment when I had to remind a very immediate family member of the name of my little corner of this outside country. I had to enunciate “Canada” and situate it in relation to America and how ‘yes it’s very similar to it, but it’s not a place that just forgot to be America.’ (Ok now that’s a keremt chika smothered slippery slope so let me just grab a hold of a zembaba branch and carefully step off. There will not be more on that later.)

“Why did you choose Canada?” is a question I get at least half a dozen times a year, guaranteed. My shortcut answer “Because it’s not America.” (shocking how casually are made the decisions that shape the rest of our lives) is good enough for most, especially for Canadian-Canadians, those most likely to assume that choice was involved. To a degree it was, and also not. But the more trips I take to Ethiopia, or the U.S or the more places I go for vacation (let’s face it, anywhere where there are family of any description – read, expectations – is not really a vacation) and the more times I return to Toronto, the more It becomes an active choice. Each time, my sense that yes, this really is the best seat in the house for the now-long-term (once a nomad, always) gets more solidified.

Mapping this process of delayed choice making, I’ve discovered, is best done by taking stock of the different qualities of my trips to Ethiopia and how each one reflected whatever phase of my relationship to Ethiopia I happened to be in at that moment. To date, there have been seven trips (toled you I was rich) and seven distinct phases. Well, five really but I teased out two sub-phases because the Libra in me is always tipping for balance.